UNESCO has declared Bihar’s much awaited ancient site – the ruins of Nalanda Mahavihara – a World Heritage Site, barely 98 km away from Patna. With the inclusion of Nalanda, this would be the second UNESCO Heritage Site after Mahabodhi temple in Bodh Gaya.

“Nalanda stands out as the most ancient university of the Indian Subcontinent. It engaged in the organized transmission of knowledge over an uninterrupted period of 800 years. The historical development of the site testifies to the development of Buddhism into a religion and the flourishing of monastic and educational traditions,” said UNESCO on its website.

The Nalanda Mahavihara site comprises the archaeological remains of a monastic and scholastic institution dating from the 3rd century BC to the 13th century AD.

Nalanda in Bihar is renowned for its ancient monastic university, is a place hallowed by the memory of the Buddha. Many texts supports the fact that Buddha stayed here a good amount of time.

Nalanda Mahavihara had 4 gates and at every gate the Janitor used to the an enlightened man who used to take interview before giving the permission to enter the campus of the university. At every gate there used to be the temple of Buddha. The temples floor was made by Mica stone and copper plate for light in the temple. The theory of reflection was used for the purpose. There was improved drainage system in the university. There were 52 lakes out of which 12 lakes have been found. Statues here were made of clay, lime and Shirki. The bricks used at the university has the dimension 12-8-2 inch.

The accounts of the Chinease pilgrims, Fa-Hien, Hiuen Tsang and I-tsing are the most important sources, barring the archaeological and epigraphic material that helps us to construct a fairly clear picture of the university of Nalanda, its building, its staff, its curriculum of studies during the days of its zenith. Hiuen Tsang lived here for 12 years ,6 years as student and other 6 years as professor.

Nalanda has a very ancient history going back to the days of Mahavira and Buddha in the sixth and fifth centuries B.C. According to Jain text it was a suburb( bahiriya), situated to the north-west of the famous city of Rajagriha. Indeed, so important was the place that Mahavira spent as many as fourteen rainy season here. The Pali Buddhist literature as well contains many references to Nalanda. It is said that in course of his sojourns Buddha often visited the place, which is mentioned as prosperous, swelling, teeming with population and containing a mango-grove called Pavarika. Archaeological Site of Nalanda Mahavihara (Nalanda University) is among top in the list of tourist places to visit in Nalanda.
According to Taranatha – Ashoka, the Great Mauryan-emperor of the 3 B.C., gave offering to the Chaitya of Sariputra that existed at Nalanda and erected a temple here : Ashoka must therefore be regarded as the founder of the Nalanda-Vihara. The same authority adds that Nagarjuna, the famous Mahayana philosopher and alchemist of about 2 B.C. began his studies at Nalanda and later on became the high-priest here. It is also added that Suvishnu, a Brahamana contemporary of Nagarjuna, built one hundred and eight temples at Nalanda to prevent the decline of Hinayana and Mahayana School of Buddhism. 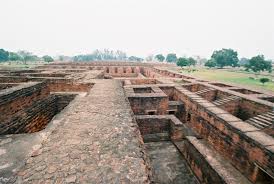 The earliest datable finds being a copper plate of Samudragupta and a coin of Kumaragupta. This is a fully confirmed by the statement of Hiuen Tsang that a farmer king of the country named Sakraditya selected by augury a lucky spot and built here a monastery and that his successors, Buddhagupta, Tathagatagupta, Baladitya amd Vajra built some monastery near by. As some of these names were borne by the Gupta emperor, it has been held that all of them refer to the imperial Guptas of the fifth to sixth century.
The assumption that the monasteries of Nalanda were the creation of the Gupta emperors beginning with Kumaragupta.
Each student were provided one single room.

Hiuen Tsang saw here an 24.4 m high copper image of Buddha raised by Purnavarman. ‘the last of the Asoka- rajs, belonging to the early sixth century. And the illustrious Harshavardhan of Kanauj (606-647) no doubt greatly helped the institution by his munificence: he built a monastery of brass, which was under construction when Hiuen Tsang visited the place. The biographer of Hiuen Tsang says that Harsha remitted ‘ therevenues of about a hundred villages as an endowment of the convent and two hundred householders in these villages contributed the required amount of rice. butte and milk hence the students here , being so abundantly supplied, do not require to ask for the four requisite’. About a thousand monks of Nalanda were present at the royal congregational at Kanauj. Royal patronage was, therefore, the keynote of the prosperity and efficiency of Nalanda. It is among top in the list of tourist places to visit in Nalanda.

The Pala emperors held east India from the eighth to the twelve century A.D. and were noted for their patronage of Mahayana Buddhism. At the same time they established other monasteries at Vikaramsila, Somarupa, Odantapuri and Jagaddala. There are ample epigraphic and literary evidences to show that the Palas continued to be liberal in their munificence to Nalanda.
At this period each room was provided to two students one senior and a junior so that junior student can maintain discipline with senior. 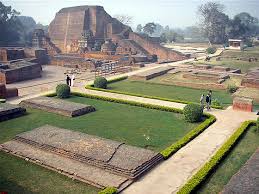 Nalanda was the largest residential university in ancient time in India. It accommodated within its precincts a vast university colony consisting of 9,500 students and 1510 teachers together with executive and menial staff. An elaborate scheme was adopted for well planned and well organised library within monasteries. These buildings were huge and many storeyed edifices located in a part of the campus called Dharmaganja and three of them bore the names of Ratnodadhi (sea of jewels), ratna-sagar (Ocean of jewels) and Ratnaranjaka (Jewel- adorned). According to a legend preserved in the Tibetan accounts these libraries were destroyed by five kindled by the supernatural power of two Tantric ascetic, who were maltreated by the innats of university. There is no means now to verify the veracity of the statement, although amidst the debris of the ruins of the Nalanda monastery evidences of destruction by five have been revealed by excavations. Archaeological Site of Nalanda Mahavihara (Nalanda University) is among top in the list of tourist places to visit in Nalanda.

It is impossible to give a separate accounts of the end of Nalanda, it only forms a chapter of the history of the disappearance of Buddhism from India.

It is evident from the accounts of Hiuen Tsang that Buddhism was slowly decaying when he visited India. Important centres of early Buddhism were deserted, though some new centre, such as Nalanda in the east, Valabhi in the west and Kanchi in the south had sprung up. After some Buddhim lost its hold in other provinces and flourished only in Bihar and Bengal, where royal patronage succeeded in keeping alive a dying cause. But it is clear that Buddhism was no longer popular and centered around a few monasteries. The crusades of The Brahmanical philosophers and preachers such as Kumarila and Sankracharya in the eight century must have been another potent factor in rendering Buddhism unpopular. The final blow was delivered by the Muslim invaders, who according to their own accounts, drove away the monks and destroyed their cloisters. Cut off from and divorced strength in early days, Buddhism virtually disappeared from India with this onelaught.

The Muslim historian Minjah describes how Muhammad Bakhtiyar Khilji (12 A.D.) fell upon and destroyed a city in western Bihar, which they called Bihar (Sanskrit Vihara) and which was found to be a place of study. Khilji burnt the library which took 6 months to completely burn. It is not unlikely that Nalanda is being referred here. Taranatha says that ‘ The Turks conquered the whole of Magadha and destroyed many monasteries, at Nalanda they did much damage and the monks fled abroad.

The summer of 1235 saw another attack on Nalanda, at that time with two surviving monasteries inhabited by some seventy monks including a Tibetan Dharmasvamin, who has left an eye-witnemm account of the incident.

Another Tibetan text, the Pag-sam jon-Zang however, adds that after the raid of the Turks the temples and chaityas were repaired by a sage , Muditabhadra. ‘Soon after this, Kukutasiddha, minister of the king of Magadha erected a temple at Nalanda and while a religious sermon was being delivered there, two very indignant Tirthika( Brahamanical) mendicants appeared. Some naughty young novice- monks in disdain threw washing water on them. This made them very angry. After propitiating the sun for 12 years, they performed a yajna( fire sacrifice) and threw living embers and ashes from the sacrificial pit into the Buddhist temple etc. This produced a great conflagration which consumed Ratnodadhi’, one of the libraries of Nalanda. Remains of Nalanda University is not only among the top tourist places to visit in Nalanda but also in India.

Places to Visit in Nalanda