12 Best Tourist Places in Bihar, Places to Visit in Bihar

Maverick | March 14, 2016
4.2 / 5 ( 5 votes )
Bihar is an ancient state in eastern India with a rich cultural heritage. Thus offers variety of tourist places to visit in Bihar. Also very natural mineral wealth, Bihar is a developing state with all sources dedicated towards infrastructure development.

Seat of the ancient Indian Empires, Bihar has the national archaeological heritage sites of Nalanda and Vaishali, where ruins of ancient cities can be seen. Naturally beautiful and as yet unexplored- the interiors of the state are home of tribal, some of whom still live in their natural habitat. Bihar also has some rare Buddhist temples and shrines as well.

Bihar is considered gateway to Buddhist and Jain pilgrimage.

There are daily flights from Delhi, Calcutta and Lucknow. Several trains leave Delhi daily for 15-hour journey to Patna. From Calcutta, the trip by rail takes around 12 hours. Patna has extensive road connections with Bodhgaya (125 km), Calcutta (608 km), Nalanda (90 km), Pawapuri (90 km), Rajgir (102 km) and many other places of tourist interest within Bihar and the neighbouring state of Uttar Pradesh.

Tourist Places to Visit in Bihar: –

Nalanda, renowned for its ancient monastic university, is a place hallowed by the memory of the Buddha. Nalanda university had 4 gates and at every gate the Janitor used to the an enlightened man who used to take interview before giving the permission to enter the campus of the university. At every gate there used to be the temple of Buddha. The temples floor was made by Mica stone and copper plate for light in the temple. The theory of reflection was used for the purpose. There was improved drainage system in the university. There were 52 lakes out of which 12 lakes have been found. Statues here were made of clay, lime and Shirki. The bricks used at the university has the dimension 12-8-2 inch. Nalanda is among top tourist places to visit in Bihar.

The Buddha lived in the sixth century BC, Mahavir was born in 567 BC and the traveller in Bihar will encounter them both constantly. Rajgir is 10 km south of Nalanda and sacred to the memory of the founder of Buddhism and Jainism. Lord Buddha spent many months of retreat during the rainy season here, and used to meditate and preach on Griddhkuta, the ‘Hill of the Vultures’. Lord Mahavir spent fourteen years of his life at Rajgir and Nalanda. It was in Rajgriha that Lord Buddha delievered some of the famous sermons and converted king Bimbisara of the Magadha Kingdom and countless others to his creed. Once, a great city, Rajgir is just a village today, but vestiges of a legendary and historical past remain, like the cyclopean wall that encircles the town and the marks engraved in rock that local folklore ascribes to Lord Krishna’s chariot. This legend, like many others, associates Rajgir to that distant time when the stirring events recorded in the epic Mahabharata were being enacted.
Rajgir is located in a verdant valley surronded by rocky hills. An aerial ropeway provides the link with a hill-top stupa “Peace Pagoda” built by the Japanese. On one of the hills in the cave of Saptparni, was held the first Buddhist Council. The Saptparni Cave is also the source of the Rajgir Hot Water Springs that have curative properties and are sacred to the Hindus. Rajgir is one of top tourist places to visit in Bihar.

Beneath the din and bustle of Patna, the capital of Bihar state, has a fascinating past. And in each chapter of its history, it has been crowned by a new name- Kusumpur, Pushpapur, Patliputra and Azeemabad.

Turning over the pages of early Indian history one comes across the name of the pre-eminent city of Patliputra. Located at the site where Patna is today, this city saw the rise and fall of India’s first major kingdoms. Its period of glory spanned a thousand years, from 6th century BC to 6th century AD.

Ajatsatru, second in the line of Magadha kings, built a small fort at Pataligram at the confluence of rivers Ganga and Sone. This later became the famous Mauryan metropolis of Patliputra and was ruled by Chandragupta Maurya ( a contemporary of Alexander), and his grandson Ashoka, acclaimed for the spread of Buddhism. Other emperors who ruled from Patna were the Gupta and Pala kings, Sher Shah Suri (16th century) and Azimush-Shan (18th century), grandson of the Mughal emperor Aurangzeb who renamed it Azeemabad.

Today, Patna is an important business centre of eastern India. More significantly, it is a gateway to the Buddhist and Jain pilgrim centres of Vaishali, Rajgir, Nalanda, Bodhgaya and Pawapuri. It qualifies as one of the best tourist places to visit in Bihar.

Serene and quiet this tiny little village, holiest among holy places is Bodhgaya, where the quest of Prince Siddharth was fulfilled after years of seeking the truth and saga of Buddha began. He attained the supreme enlightened and became ‘The Buddha’, the enlighten one. Thus Buddhism was born here under the Peepal tree. The prince had been wandering in search of supreme peace for long six years hither and thither. But it was at Bodhgaya only where his holy mission was achieved.

It stands east to the Bodhi tree. Its architectural effect is superb. Its basement is 48 sq. feet and it rises

in the form of a slender pyramid, till it reaches neck, which is cylindrical in shape. The total height of the temple is 170 feet and on the top of the temple are Chatras which symbolise sovereignity of religion. Four towers on its four corners rise gracefully giving the holy structure a poise and balance. This sacred edifice is like a grand banner unfurled by time to proclaim to the world the pious efforts of the Buddha to solve the knots of human miseries to ascend above worldly problems and to attain transcendental peace through wisdom, good conduct and discipline life. Inside the temple in the main sanctum, on an altar, is a colossal image of Buddha in a sitting posture touching the earth by his right hand. In this posture the Buddha accomplished the supreme enlightenment. Bodhgaya qualifies as one of the best tourist places to visit in Bihar.

Vaishali has a past that pre-dates recorded history. It is held that the town derives its name from king Vishal, whose heroic deeds are narrated in the Hindu epic Ramayana. However, history records that around the time Pataliputra was the centre of political activity in the Gangetic plains, Vaishali came into existence as centre of industry and trade. Lying on the north bank of the Ganga, it was the seat of the Republic of Vajji. Vaishali is credited with being the World’s First republic to have a duly elected assembly of representatives and efficient administration.
The Lord Buddha visited Vaishali more than once during his life time and announced his approaching Mahapariniravana to the great followers he had here.
Hundred year after he attained Mahapariniravana, it was the venue of the second Buddhist council. According to one belief, the Jain Tirthankar, Lord Mahavir was born at Vaishali. The Chinese traveller Fa-Hien and hieun Tsang also visited this place in early 5th and 7th centuries respectively and wrote about Vaishali.
While talking of the famous men and women associated with Vaishali, Ampravali was the cynosure not only of Vaishali but of the neighbouring kingdoms as well. Therefore, to avert bloodshed, the parliament of Vaishali declared her to be Court Dancer besides consigning her to lifelong spinsterhood. Later she became devout Buddhist and served the Lord Buddha. Vaishali qualifies as one of the best tourist places to visit in Bihar. 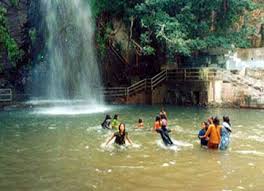 A marble temple, the Jalmandir, was later built in the middle of the tank, and is now a major pilgrimage spot for Jains. Jal Mandir marks the spot where Lord Mahavira was cremated in Pawapuri. According to legend, there was a great rush among the gathered devotees to collect his ashes resulting in a lake being created in the hollow. The temple was built in the middle of this lake by King Nandivardhan. Surrounded by blooming lotuses the temple enshrines the “Charan Paduka” or holy sandals of Mahavira. It is built in the shape of a “Vimana” or palace and is connected to the mainland by a 600-ft long stone bridge. Apart from its immense religious significance, the temple is a beautiful structure with a tranquil and scenic setting. Jal Mandir is made in shape of Vimana. The sanctum of temple enshrines old “Charan Paduka” of Lord Mahavira.  Jal Mandir is top in the list of tourist places to visit in Bihar specially among Jains and Hindus. More Tourist Places to Visit in Pawapuri

Remains of Vikramshila University At Bhagalpur 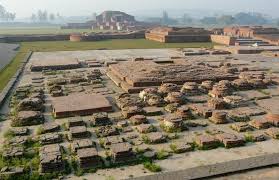 Situated 38 km from Bhagalpur. The ruins of the Vikramsila university which flourished from 9th century CE till 13th century CE. It was established by the Dharmapala from Pala dynasty. This Buddhist University had more than hundred teachers and above thousand students. Subjects like theology, philosophy, grammar, metaphysics, logic etc. were taught here but the most important branch of learning was tantrism.

A huge square remain of the main double storied stupa with a cruciform structure in its centre, a library building and cluster of votive stupas have been excavated. It is among top in the list of tourist places to visit in Bihar. To the north of monastery a number of scattered structures including a Tibetan and a Hindu temple have been found. The entire spread is over an area of more than hundred acres. More Tourist Places to Visit in Bhagalpur 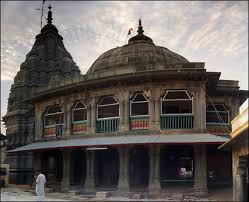 Vishnupad Temple, dedicated to Lord Vishnu, is one of the major  destination for Hindu Pilgrimage.  Located on Falgu River banks, Vishnupad temple is considered to be constructed on Lord Vishnu’s footprints and hence the name. This ancient temple was reconstructed in the year 1787 by Indore’s queen Rani Ahilya Bai. Located on the bank of River Falgu, the temple has footprint of Lord Vishnu, which is 40 centimetres long and enclosed by a basin made of silver plates. The huge temple complex displays images of various gods and goddesses. Temple for Lord Nrisimha is found in the courtyard of Vishnupad temple. This temple is constructed using stone pillars and brick walls. It is top in the list of tourist places to visit in Bihar among Hindus.
The eastern side of this temple is dedicated to Lord Shiva, who resides here in the form of Phalgwisvara. This form of Lord Shiva is known as the lord of the River Falgu. More Tourist Places to Visit in Gaya 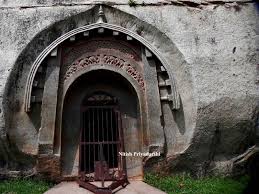 Barabar Caves date back to Mauryan era that span between 322 BC and 185 BC. They proudly hold the top rank of being the most ancient surviving rock-cut caves in the land. It is located at a distance of 25 km from Gaya.  The caves were carved during the first phase of development of Buddhism. It is top in the list of tourist places to visit in Bihar. More Tourist Places to Visit in Gaya