3 Places to Visit in Karnataka

Nestling between the Eastern and the Western coasts and sloping down into the Arabian sea is Karnataka, formerly known as Mysore.

Karnataka has the beautiful Hoysala temples of Belur and Helebid, the Jain statue of Gommateswara, the Krishna shrine of Udipi, Gol Gumbad of Bijapur and the Bandipur Wildlife sanctuary. It also houses the Chalukya temples at Pattadakal, Aihole and the ruins of Hampi. A confluence of several religious and sects, Karnataka has some major education institutes as well as industrial areas.

Tourist places to visit in Karnataka :

The garden City of India. The Pensioner’s paradise. The Silicon Valley of the East. The fastest growing city in Asia…….. Bangalore wears its many titles with ease. It’s city that is content with its identity.
Bangalore is known for its salubrious climate. Its sprawling parks and gardens. Its stately buildings. Despite being one of the fastest growing cities in this part of the world, Bangalore still retains its old world charm. People still find time to take long strolls in Cubbon Park or Lalbagh. Window-shop on M.G.Road make coffee the old traditional way. Cook elaborate meals during festivals. Bangalore has a lot to offer the tourists. Plenty of sightseeing. Lovely spots where one can go for a fun-filled picnic. Restaurants offering every conceivable variety of cuisine. And some excellent shopping.
The Legend Tale
Tired and hungry, the Hoysala prince, separated from his soldiers, was lost in the forest. As he travelled slowly through the tall trees and thick brush he spotted a little hut and with renewed energy moved on. He knocked hopefully and the door was opened by an old woman, who welcomed the exhausted Prince into her humble home and offered him some ‘Bendakalu’, boiled beans which he ate hungrily. He asked her the name of the place, the gracious lady misunderstood and said, ;Bendakalu’, meaning boiled beans. The prince thanked her for her hospitality. Refreshed, he found his way home and decided to name that place which gave him hope and led him home, ‘Ben kala uru’. And thus, Bangalore got its name. Bangalore is top tourist places to visit in Karnataka.
Today, the ‘town of boiled beans’ has evolved into an energetic city with a perpetual holiday atmosphere, thanks mainly to its picnic weather. Founded in 1537 by the Hoysala King- Kempe Gowda, Bangalore has grown far beyond the four towers built by him to mark the city’s boundaries.
As ‘Asia’s fastest growing city’, Bangalore has so much to offer a tourist. From music and dance concerts (Western and Indian), to dramas, exhibitions and carnivals. You can tickle you taste buds at the many restaurants the city has, watch movies, window shop or just relax with a round of golf.

Click on below link for more details on tourist attraction in Bangalore.

Tourist Places to visit in Bangalore

Tourist places to visit near Bangalore

Mysore-the city of palaces-is different from Bangalore.It has no big city pretensions. In fact, it revels in its “small town” ambience-celebrated and immortalised by R.K.Narayan in his Malgudi Days. Mysore with its palaces and its famed Brindavan Gardens, is a must-see for all tourists.
Maharajas and palaces, silk and sandalwood, the lingering aroma of incense, the delicious flavour of Mysore Pak, the Pomp and pageantry of Dasara… Welcome to Mysore, the city of palaces. 140 km from Bangalore, this imperial city was the erstwhile capital of the wodeyars and continue to be one of the most popular tourist destination in India. Mysore is among top tourist places to visit in Karnataka.
‘Mahishaura Ooru’, (Mysore as we know it now) was once named after the demon ‘Mahishasura’, who was slain by Goddess Chamundeshwari, the patron deity of the royal family. The hills dedicated to her stand at the eastern end of the charming town.

Tourist Places to visit in Mysore

Tourist places to visit near Mysore

Hampi is among top tourist destination in Karnataka. Hampi Monuments are credited with UNESCO World heritage. The Vijayanagar city ruins near the village of Hampi, 353 km, from Bangalore, are one of the most fascinating historical sites in South India. 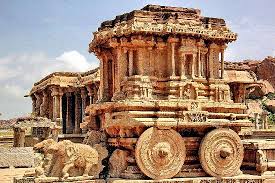 Also worth a visit are the Queen’s Bath with its arched corridors, projecting balconies and lotus shaped fountains, the two storeyed Lotus Mahal, the huge Elephant stables, the splendid Vitthala temple with its musical pillars and the stone chariot, the Virupaksha Temple, Ugra Narasimha, the 6.7 km metres tall monolithic, the Pushkatni Tank, the Mahanavami Dibba, etc.
Temples of the city are noted for their large dimensions, florid ornamentation, bold and delicate carvings, stately pillars, magnificent pavilions and a great wealth of iconographic and traditional depictions which include subjects from the Ramayana and the Mahabharata.

Create your own review
Places to visit in Karnataka
Average rating:   0 reviews

3 Places to Visit in Karnataka